Polymeric coatings, which are available in solvent-based or water-based formulations, represent an enormous global market. A crucial difference between the two coatings types is whether volatile organic compounds (VOCs) or water is used as the bulk solvent carrier. The life span of these objects is prolonged, often dramatically, by the protection afforded by the coating. The increased lifetime of the protected structures decreases the required frequency for replacement, thereby decreasing long term environmental impact and overall carbon footprint.  The primary disadvantage, and the incentive to transition away from solvent-based coatings, is the amount of organic solvents used. Solvent evaporation causes smog formation, poses flammability and inhalation risks to workers and increases insurance costs. While solvent-based coatings have performance advantages, water-based coatings have environmental, health and safety advantages. We have developed a coating that shares both sets of advantages.

Polymers used for solvent-based coatings must be sufficiently hydrophobic to provide water resistance. Additionally, the polymer must have an appropriate hardness to provide good mechanical strength and resistance to damage. When the coating is applied, organic solvents evaporate from the surface, bringing the polymer chains into close contact and forming an entangled network on the substrate surface. Solvent-based coatings are valued for the high-quality and durable coatings they provide, including high gloss coatings resulting from the very smooth film surface that forms as the solvent slowly evaporates.

The use of water-based paints and coatings (latexes) addresses concerns of high VOC emissions from solvent-based systems. Water-based coatings consist of an aqueous suspension of ~50-300 nm polymer particles suspended in an aqueous phase, plus additives such as opacity agents, pigments and coalescing aids. Film formation after paint application occurs as water evaporates, thereby bringing the particles into close contact. What follows is a complex film formation process in which individual polymer particle chains diffuse across interparticle boundaries, leading to a gradual coalescence of the particles into a coherent film. Water-based paints perform poorly if applied at low temperatures (≤ ~10 ˚C), due to inadequate interparticle diffusion of polymer chains combined with slower water evaporation, resulting in poor quality films that lack durability, including poor resistance to mechanical abrasion (e.g. cleaning or scrubbing) that leads to the film “chalking”. Furthermore, high gloss coatings are often difficult to achieve with water-based paints because the film surface may retain microscale roughness from the coalesced individual particles. It is common practice for water-based paints to have a small amount (~50 g VOC/L) of a coalescing aid; a VOC that aids film formation. For that reason, current iterations of “zero VOC” water-based paints or coatings may not actually have zero VOCs. Despite their commercial success, water-based coatings have not been able to replace solvent-based coatings in all markets, leaving significant use of solvents in coatings applications globally.

An ideal coating system would combine the performance advantages of solvent-based coatings with the environmental, health and safety advantages of water-based coatings, while removing their respective disadvantages. This ideal system would be a homogeneous solution of dissolved polymer requiring no VOCs or additives to aid the formation of a continuous coating once cast. In this work, we are using CO2-switchable polymers that are hydrophilic in carbonated water, but hydrophobic in the absence of CO2 or any other acid. Having the polymer chains fully dissolved in a homogeneous solution allows for the high performance of a solvent-based system, but with the use of carbonated water rather than an organic solvent as the carrier. 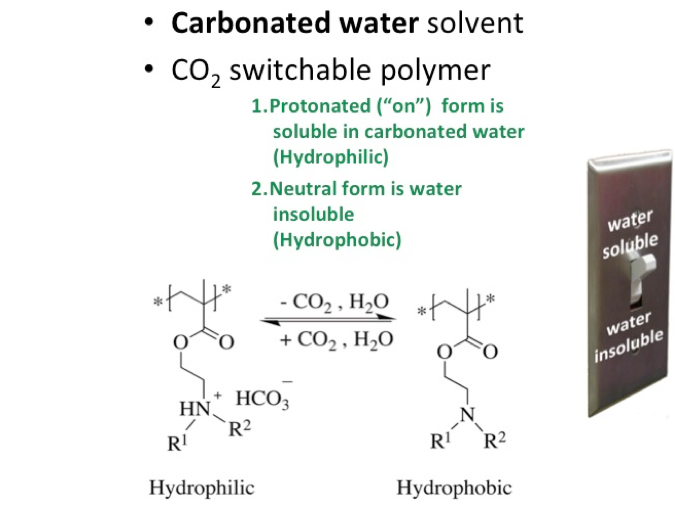